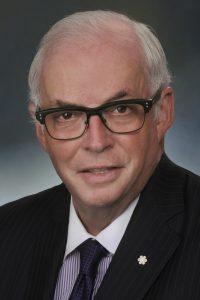 He is a director and past chair of the Mining Association of Canada, where he championed development of the Toward Sustainable Mining initiative, which is designed to help improve the mining industry’s environmental and social performance.  In January 2017, Mr. Carter was inducted into the Canadian Mining Hall of Fame.  Mr. Carter was also a member, director, and executive member of the Alberta Chamber of Resources for many years, and championed the Oil Sands Technology Roadmap and Aboriginal Programs Project.

Mr. Carter holds a B.Sc. (Mining, Engineering) and is a graduate of the Advanced Management Program at Harvard Graduate School of Business Administration. He is the recipient of three honorary Doctorates, from the Technical University of Nova Scotia (Engineering, 1995), University of Alberta (Science, 2004), and the University of Prince Edward Island (Law, 2008).

In 2005, Mr. Carter was named Resource Person of the Year by the Alberta Chamber of Resources and was inducted as a Fellow of the Canadian Academy of Engineering.  In 2013, Mr. Carter was inducted into the Canadian Petroleum Hall of Fame.  In recognition of his contribution to industry and for helping drive the economic development and prosperity in Alberta, the Governor General of Canada announced in June 2014, Mr. Carter’s appointment as an Officer of the Order of Canada.